Home » Blog » What Is a Hyperscale Data Center?

What Is a Hyperscale Data Center?

A data center houses and processes an organization’s most business-critical data. In the old days of data centers, large enterprise facilities were the top players in efficiency, security and cutting-edge equipment.

With the recent rise of hyperscale data centers (HDCs), however, the data center world is rapidly changing. According to current estimates, the number of HDCs in operation could grow to 1,200 worldwide by 2026. HDC market projections show significant growth from 2021 to 2026 at a compound annual growth rate (CAGR) of 3.38%.

Global hyperscalers are leading the industry in energy efficiency, technology innovations and computing performance. This post explains what makes a data center an HDC, how it differs from standard data centers and why this new type of facility is at the forefront of today’s IT landscape.

An HDC is a massive computing facility exceeding 5,000 servers and 10,000 square feet. Because they’re so large, their design is significantly different from most standard data centers. These facilities are built to facilitate easy, rapid deployment without reducing performance and efficiency.

The defining characteristic of HDCs is their ability to scale rapidly when demand changes. This agility goes beyond simply scaling up to meet growing demand — HDCs are also capable of quickly scaling down and “out” as needed. Scaling out is a horizontal approach to meeting client needs that involves adding more servers to the existing infrastructure. HDCs often scale out to minimize latency for their clients, which is known as edge computing.

Although they may seem similar, HDCs differ from enterprise data centers in many ways. Some key differences include:

Edge computing involves processing data as close to its geographical origin as possible to minimize latency. Often, this involves moving some processing infrastructure out of the main data center and closer to the data source.

Instead of transmitting raw data to the central facility for processing and analysis, the localized infrastructure can perform the necessary operations where the data originates. Only the products of that analysis go on to the main data center for review and storage. 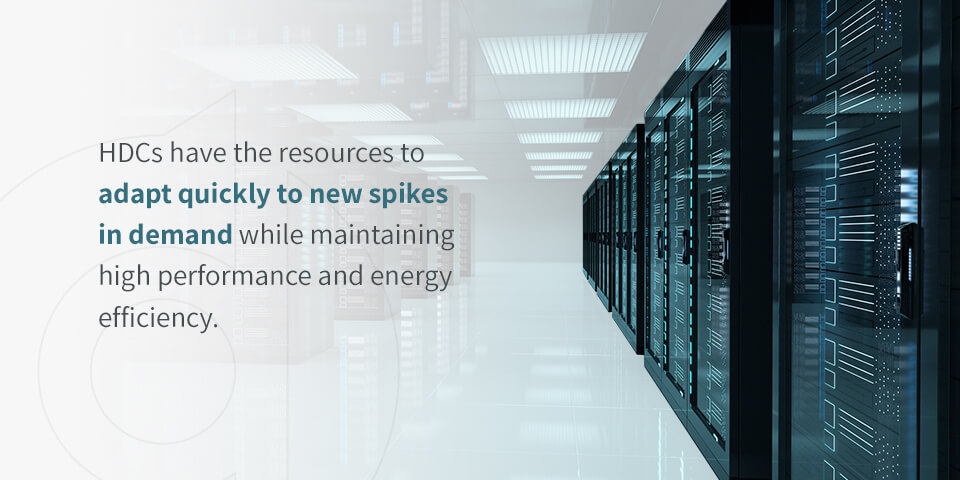 In contrast, HDCs are more general information hubs — like your standard central data center, but on a massive scale. HDCs have the resources to adapt quickly to new spikes in demand while maintaining high performance and energy efficiency.

The most prominent hyperscale data center companies include today’s biggest names in tech. These companies have enormous data processing and storage needs beyond what the typical enterprise data center can meet.

Typically, companies that own HDCs generate revenue directly through the apps and products they sell.

Some of the most recognizable hyperscalers include:

Of these companies, U.S.-based tech companies own the largest proportion of hyperscale data centers worldwide. Often, if a company’s needs expand to hyperscale requirements, it will either build its own facility or lease infrastructure from data center development companies.

Where Did Hyperscale Data Centers Come From?

More companies are outsourcing their IT systems than ever, and demand for cloud storage and computing services has soared in recent years. One of the main drivers behind this spike in demand is the rapid growth of internet companies, the Internet of Things (IoT), 5G and AI deployments.

Hyperscale data centers arose to meet that need. With their ability to scale out beyond what standard data centers can do, they enable the growth of edge computing services closer to the origins of data.

Where Are Hyperscale Data Centers Located?

Most HDCs are located in Tier 1 markets — central locations that enable minimal latency. Here are some examples:

However, if they can achieve strong connectivity and have a reliable energy source available, hyperscale data center companies can set up in rural areas. Examples include locations like Ohio and Oregon. 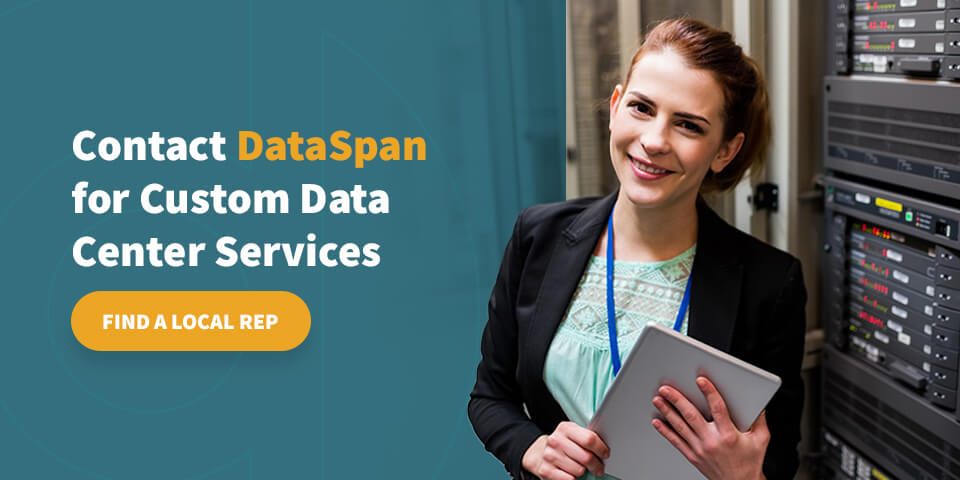 As cloud services, edge computing and internet companies continue to grow, data centers will need increased capacity and efficiency to meet their client’s performance needs. HDCs have already mastered these concepts, but many smaller data centers must catch up to remain competitive.

If you’re considering scaling up, down or out, the experts at DataSpan can help you develop the solutions you need to reach your goals. Find your nearest rep here, or contact us for more information.